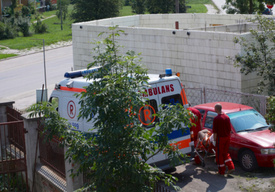 Legal news for Massachusetts personal injury attorneys –A pedestrian pushing a shopping cart was struck by a Lexus and taken to south shore hospital where she died.

Norwell, MA (NewYorkInjuryNews.com) – A woman, who was pushing a shopping cart, attempted to cross the street Monday evening and was struck by a car, December 14, 2009, according to the Taunton Daily Gazette.

The Norwell woman, identified by investigating police, as 64-year-old Jana Small, was in the southbound lanes of Route 53 when she struck by a moving vehicle in front of the Stop & Shop and Beijing House. Police reported that the accident occurred at 7:40 p.m. when the woman was thrown upon impact with the car. Another vehicle swerved out of the way to avoid striking Small again.

Emergency medical services (EMS) arrived at the scene and rushed her to the hospital. Small was in critical condition when she arrived at South Shore Hospital in Weymouth. Doctors declared her to be dead shortly after arrival.

Police officials reported that a part of Route 53 was shut down for a few hours so that investigating police and the reconstruction crew could probe the scene of the fatal and tragic accident. Police only identified the driver that struck Small as a 76-year-old who was driving a 1996 Lexus at the time. No charges have been pressed.