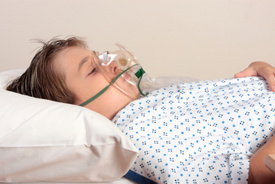 Legal news for Massachusetts personal injury attorneys—MBTA buses and ambulances arrived at a Boston school after a gas leak evacuated students and dozens were ill from the gas.

Boston, MA (NewYorkInjuryNews.com) – The Excel Academy Charter School was evacuated due to a gas leak that made students develop feelings of nausea and dizziness, Monday, December 14, 2009, according to the Boston Herald.

A reported 34 students between the ages of 9 and 12-years-old were transported via emergency medical services (EMS) to area hospitals for evaluation. Authorities reported that the natural gas was circulated through the school’s air-conditioning system. A few students were treated by medical personnel at the scene.

Boston Fire Department spokesperson reported that the gas leak began around 10 a.m. when a maintenance worker had briefly released some gas while working on the school’s heating system. Firefighters could not trace the gas since it was briefly shot into the air prior to their arrival.

The Academy’s authorities picked up the smell of gas and quickly pulled the fire alarm to get the 200 children out of the building. Many students huddled under blankets, while others kept moving to stay warm in the wintry conditions.

About an hour after the evacuation, four Massachusetts Bay Transportation Authority (MBTA) buses arrived at the school where the children boarded the buses to stay warm. Ambulances and police along with worried parents were at the scene while some of their children wore oxygen masks after inhaling the gas.

Some parents took their children home before the school reopened at 1:30 p.m. for the remaining children to resume their school schedules.