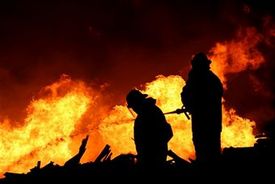 Georges Township, PA (NewYorkInjuryNews.com) – A firefighter was injured at the scene while battling a house fire in Fayette County, on Friday morning, December 4, 2009, according to WPXI.

Around 150 firefighters from the surrounding Townships such as Collier, Smithfield, Fairchance and Hopwood, responded to the scene at 2:30 a.m where the house, which was being remodeled, became a blazing inferno. Firefighters fought the blaze vigorously, but the flames continued to grow and engulf the entire structure.

Dozens of firefighters battled the blaze for a half an hour until the structure finally collapsed. One volunteer firefighter, who was in the fiery structure, quickly ran out as it fell to the ground behind him.

The male firefighter suffered a leg injury in the blaze. Luckily, there was nobody inside the house when the fire began. State police fire marshals are investigating the situation to determine the cause of the blaze. It was not stated if officials believed it was intentionally set. Firefighters pronounced the house a complete loss.

Emergency medical services (EMS) reported that the injured firefighter was transported to Uniontown Hospital. Authorities did not disclose his name or condition.