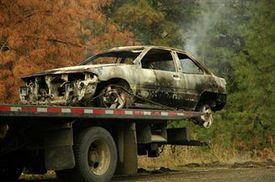 Police and emergency medical services (EMS) reported to the horrific scene where three vehicles collided. Police reported that the accident took place early Tuesday morning around 6:10 a.m., when 67-year-old Ellen Liedtka was driving on the highway, after her family reported her missing on Monday afternoon.

Liedtka, who suffered from Alzheimer’s, apparently slowed down while driving in the fast lane of traffic in a Mercury Sable. The Mercury was then struck by a 2009 Subaru from behind, and was launched it into the middle lane. A semi truck then crashed into Liedtka’s vehicle, when it was thrown into a cement divider and tragically exploded into flames.

Police rushed to the scene and attempted to put out the fiery vehicle with the woman trapped inside. Liedtka’s injuries proved fatal at the scene, and was declared dead by the Burlington County medical examiner’s officer. Police identified the driver of the Subaru as 78-year-old Bernard Pittinsky, resident of Baldwin, New York.

He or his wife traveling in the Subaru did not sustain injuries in the crash. The operator of the semi truck, identified as 43-year-old Jhonger A. Javiera, resident of Providence, Rhode Island also escaped without injury. The three vehicle accident closed the pike’s southbound lanes for three hours.