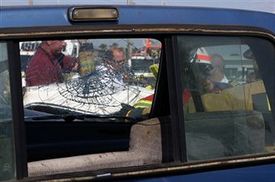 Anne Arundel County police officials reported to the scene where a Jeep Cherokee struck a car stopped at a traffic signal. The collision caused two other cars to become a part of the four-vehicle pile-up, that occurred in Severna Park around mid day.

Emergency medical services (EMS) reported to the scene on Ritchie Highway near Cypress Creek Road, to transport the injured for treatment. One of the victims involved in the crash, 64-year-old Linda Lee Henschen, died after her injuries proved fatal at the scene.

Anne Arundel police reported that Linda Henschen was standing near a stopped van with 43-year-old Franklin Glenn Harris. The driver of the Jeep was identified as 18-year-old Corey Zientarsky, who had struck the first vehicle from behind. The Jeep then struck two more vehicles, and struck Henschen and Harris.

EMS transported Harris, Zientarsky, and one other driver identified as 20-year-old Hai Huang Nguyen, to area hospital where they were treated by doctors and nurses for their injuries. Their conditions were not released.