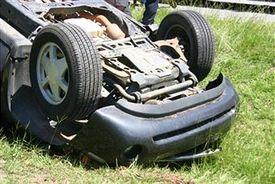 Massachusetts State police reported that the two drivers were reportedly racing with passengers in their vehicles on I-95, when they collided. The impact of the crash launched both vehicles into the nearby woods and ejected one driver from his 2001 Volkswagen Jetta.

Ambulances rushed to the scene to transport the injured. Copeland was listed in serious condition at Rhode Island Hospital where he was treated for his injuries. Medical personnel stated that he was in critical condition as of Sunday evening. Jacob was treated at the hospital, but was released. It took firefighters a half an hour to extricate another one of Demers passengers from the damaged vehicle.

The driver of the 2002 BMW racing Demers was identified as 24-year-old Vannareth Sin, who suffered minor injuries in the wreck. Sin was treated and released from the hospital on Saturday night. Both drivers will be charged with reckless operation and failure to stay inside a lane, racing, and speeding, reported State police.

Massachusetts State police remained on the scene to investigate the collision, and closed down two lanes of traffic to probe the scene of the accident. Police continue to look into the wreck to determine all the factors involved.