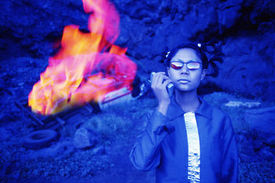 Police reported to the scene of the fiery wreck where the semi-truck crashed into the 1996 Ford Explorer when the SUV slowed down in the center lane on Route 287 in Morris County. New Jersey State police reported that the fatally injured driver of the Ford Explorer was identified as 56-year-old Kevin Moriarty, of New York.

His injuries proved fatal soon after the crash, and he was declared dead at the scene. Police reported that when the SUV slowed down, its lights did not indicate braking before the big rig rear-ended it.

The semi-truck struck the Ford and sent it spinning until it slammed into a concrete barrier. The driver of the big rig was identified as Delaware resident, 46-year-old Nelson Griffin. Police reported that he suffered an arm injury in the collision. Both of the damaged vehicles were consumed in flames and part of the highway was shut down for more than six hours. All lanes of traffic reopened at 1:30 p.m.