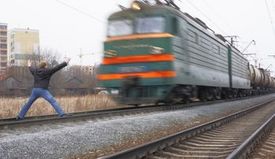 Police authorities reported to scene of the tragic incident where a Pitman borough man, identified as 31-year-old Steven Carroll, was hit by an oncoming train. The incident took place near the Lindenwold train station, reported a New Jersey Transit representative, Courtney Carroll.

It was not specified if emergency medical services transported the man to the hospital before he passed away. His injuries proved fatal soon after the train struck him. Carroll stated that they were not sure why Steven was on the tracks when the train was coming. Police reported the accident to have occurred at 4:30 p.m., Monday afternoon.

The conductor reportedly slammed on the emergency breaks when he spotted Steven on the tracks, but he could not stop fast enough before the train hit and killed him.

The train, transporting 70 passengers, had left the Atlantic City station around 3:30 p.m.; it was scheduled to arrive at the 30th Street Station at 5:15 p.m. The tragic incident closed the Atlantic City rail line in both directions for several hours.