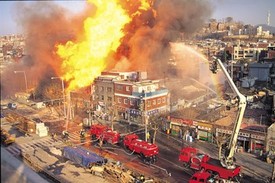 Legal news for Massachusetts Work-related Firefighter death lawyers—Injured firefighter on the mend after fall while combating fire in an apartment.

Greenfield, MA (NewYorkInjuryNews.com) – A firefighter was injured when he was combating a massive downtown fire on Friday, November 6, 2009. The firefighter fell down the stairs after the hose he was attempting to bring to the third floor became stuck, announced the Republican.

Police identified the injured firefighter as Captain Alan Tufano, who had been crouching down in the inferno so he wouldn’t inhale the cloud of black smoke, while carrying the large fire hose up the stairs in the burning apartment building.

The hose apparently got stuck on something. Tufano said that the next thing he could remember were his fellow firefighter’s carrying him out of the building to safety. The event was blurred in his mind, but he soon realized that he had fallen down the stairs.

He was transported via emergency medical services (EMS) to Baystate Franklin Medical Center for testing and treatment while under the care of doctors and nurses.

Nearly 25 surrounding fire department firefighters responded to the call around 8:30 a.m. for the all-day fire fight at 29 Chapman St. near Main Street. There were 21 tenants reportedly living in the apartment.

There were 16 who were occupying the apartment; most were rescued via aerial ladder, who fled the building at the time of the blaze. Investigators continued to seek out answers to determine the cause of the destructive blaze.