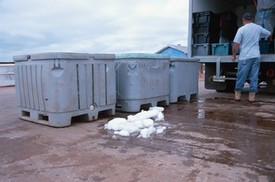 Woodbridge, NJ (NewYorkInjuryNews.com) – An employee’s leg was crushed due to the impact of a heavy crate falling off a forklift that trapped the worker against a truck Thursday, November 5, 2009, announced the Scarlett Scuttlebutt.

The ADI Marketing Inc. employees were reportedly unloading the wooden crates, on Blair Road, when a forklift moved additional large crates. As the forklift continued to pick up the larger crates, one toppled over on to a worker.

The worker lay pinned on the side of the truck with a fractured leg until police and emergency rescue crews came to the aid of the injured worker. Police reported that the accident took place at 8:45 p.m.

Emergency medical services (EMS) arrived to transport the injured person. Police did not release the identity of the ADI Marketing Inc. employee. The employee was taken to the Robert Wood Johnson University Hospital, located in Rahway, where he was treated by doctors and nurses for his injuries.

It was not reported if the Occupational Safety and Health Administration (OSHA) www.osha.gov officials were contacted. According to Wikipedia, OSHA is the government agency within the Department of Labor, who investigates work-related and construction-related accidents. The agency enforces government rules and regulations to prevent injury in the workplace.