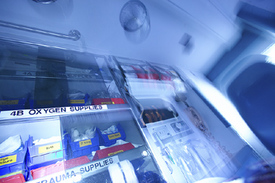 Pittsfield police reported that the crash occurred in the front of the shopping plaza at 1575 West Housatonic Street where a black Chevrolet pickup truck collided with a white Ford Tempo. The crash injured an unidentified woman in the wreck that occurred at 12:30 p.m.

Emergency medical services (EMS) arrived to transport the injured. The female driver of the Ford sedan was taken to the Berkshire Medical Center to be treated by doctors and nurses. Her condition was not known.

The driver of the pickup truck appeared to be unharmed in the crash and was not taken to the hospital. Police reported that both of the vehicles had damaged front ends due to the impact of the collision. The two vehicles were towed from the scene.

This collision was one of four incidents reported by the Pittsfield police this past week. There was a reported motorcycle crash, a two-car crash, and a pedestrian was struck by a car all in the first week of November.