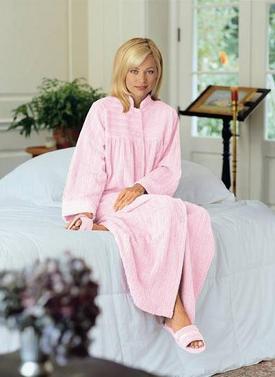 Washington, D.C. (NewYorkInjuryNews.com) – Blair LLC in cooperation with the federal agency the U.S Consumer Product Safety Commission (CPSC) www.cpsc.gov has recalled women’s chenille robes on October 22,2009 doe to nine reports of women killed from the robes catching fire. All woman consumers are advised to discontinue use of the bathrobes immediately.

The Pennsylvania–based company, Blair LLC, voluntarily recalled the full length women’s bathrobes because they are dangerously flammable. Blair also recalled all other chenille material products made by A-One Textile &Tile.

The first recall was made in April 2009, for 162,000 robes after one woman reported second degree burns along with three deaths that were also reported due to the robes catching fire. Additional injury complaints reported five more deaths where women in their 70’and 80’s were reportedly cooking or tending a pellet stove while wearing the robes.

All nine of the fatalities were reported before April’s recall. Another consumer reported one of the recalled garments catching fire but no injuries as a result of product.

The company just recently expanded the recall to all women’s chenille attire made by A-One due due highly flammable material and the potentiality to cause severe burns.

The robes and other chenille products were sold online, in catalogs, and Blair stores at locations in Grove City, P.A., Warren, P.A. and Wilmington, Delaware from July 2000 through April 2007. Full Length Women’s Chenille Robes for about $30 to $40; Women’s Chenille Jacket were $25 to $29, Women’s Chenille Top was sold for $20 to $23.

If you or anyone you know has purchased one of their chenille products, return the product and receive a 50$ gift card for other Blair products. Contact Blair at (877) 392-7095 or via email at blairproductrecall@blair.com.