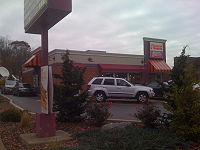 Norfolk County, MA (NewYorkInjuryNews.com) – A mother from South Shore claims that her toddler sustained severe burns by eating scorching Dunkin’ Donuts hash browns that she ordered through the drive-thru in Quincy, announced the Patriot-Ledger.

The mother, Robin MacLeod, filed a lawsuit in civil court against Dunkin’ Donuts on the claim that her 15-month-old son will always sustain permanent scarring due to the hash browns burn. The situation was that MacLeod went through the Dunkin’ Donuts drive thru and ordered a cup of coffee and hash browns on January 14 at a Quincy location of the chain, where she handed her son the snack, which felt temperate to the immediate touch, but then the toddler broke the snack in half to find a steaming hot potato, where the boy then dropped it and burned his neck.

The angry mother immediately went into the store and spoke with the manager, which she said, was to negotiate an informal resolution. MacLeod’s attorney recapped the situation and noted that the boy has a lot of scar tissue that has not healed even after several treatments. MacLeod filed her case in Supreme Court in Dedham, Massachusetts. She has not been issued a date to appear in court as of yet.

MacLeod’s lawsuit says her son was injured Jan. 14 that day at the Dunkin’ Donuts on Franklin Street in Quincy. She filed her lawsuit last month in superior court in Dedham. The case was first reported this week in Massachusetts Lawyers Weekly. No court session has been scheduled.

A Dunkin’ Donuts representative stated that at all Dunkin’ Donuts locations, the consumer’s health and well being is their first priority. They have been informed about the complaint and continue to look into the situation.