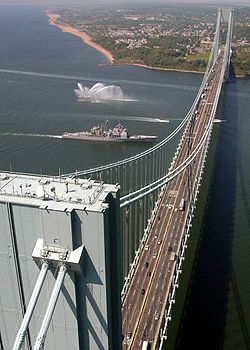 New York Truck Accident Lawyers – A trucker was injured when he crashed into tollbooth on the Verrazano-Narrows Bridge.

Staten Island (NewYorkInjuryNews.com) – A truck driver heading toward Staten Island on the Verrazano-Narrows Bridge barreled into a toll area and injured the driver, announced the Staten Island Advance.

The truck operator sustained injuries to his upper back and arms, reported officials who responded to the scene of the crash. Emergency medical services (EMS) responded to the scene of the accident on the Bridge. The medical workers were cautious to promptly remove the injured driver from the damaged vehicle because the door of the driver’s side on the truck was smashed against the toll booth, according to authorities. The driver was safety rescued through the passenger side of the truck.

Police officials reported that that the driver of the truck most likely crashed because he could not located his brakes before he had already lost control and crashed through the curb at the plaza and barreled into the toll booth. The accident took place next to lane 17 before it took out the booth, reported witnesses.

The destructive accident blocked traffic lanes of the Verrazano-Narrows Bridge feeding into Staten-Island. It was not reported how long traffic was held up for investigators to inspect the area and the crew to clean up the wreckage before it re-opened.

The Verrazano-Narrows Bridge connects Brooklyn in New York City to Staten Island. It is the largest suspension bridge built in the United States to date.