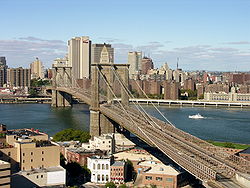 The accident involved a 36-year-old driver of a Honda Accord who collided with the garbage truck several hours before rush hour begin, reported New York State Police (NYPD). The Brooklyn Bridge was barricaded off from drivers on the Manhattan side of the Bridge for several hours after the crash for NYPD to further investigate the scene of the accident.

The victim of the collision driving the Honda has not yet been disclosed to the public. Authorities reported that the Honda Accord crashed into the Ford garbage truck, which was outfitted with alert signs and symbols on the vehicle to make other vehicles and construction workers aware of its whereabouts. The yellow garbage truck also had other safety features such as a shock-absorbing bumper that made the truck more durable.

The driver of the Honda was taken by emergency medical services (EMS) to New York Downtown Hospital where doctors and nurses declared him to be dead. New York City police detectives continue to investigate the collision in order to determine all the factors involved with this Brooklyn Bridge wreck.