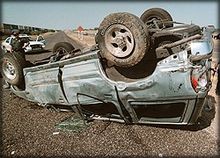 Brooklyn, NY (NewYorkInjuryNews.com) – Brooklyn Family vacationing in Florida were driving home up Interstate 75 when their SUV rolled over killing 2 and injuring 3 family members Tuesday morning, reported the Gainesville Sun. The NY family had been staying in Bushnell, FL.

The Sport Utility Vehicle reportedly swerved across the lanes, hit a guardrail and lost control rolling along the Interstate.
The mother, identified as 38-year-old Racquel Stevenson, who was riding in the front passenger seat of the SUV, was dead by the time Emergency Medical Services (EMS) arrived.

The woman’s 4-year-old son did not survive the crash, reported police officials.
The ceiling of the SUV was bent inward, reported officials.  The other family members— father Robert Stevenson and 85 year-old Norma Ramirez were hospitalized and remain in serious condition. Robert Stevenson’s daughter, 12 –year-old Makeyba Mowlah, was also in the crash and survived with only minor injuries. The reason for the devastating crash is still undetermined.

Sources stated that one plausible dynamic was that the driver was fatigued. All the people in the crash were secured in their safety belts. Interstate 75 traffic was delayed for hours after the accident site.