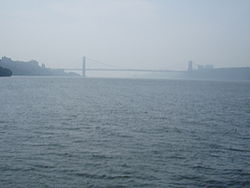 The traffic controller along with the Supervisor on duty at the time of the crash, were both temporarily banned from working due to this avoidable accident.

The FAA gave no indication that they believed that the air traffic controller and Supervisor are allegedly responsible for the crash. The two employees were being put on disciplinary leave. The employees remain unidentified as well as the person he was talking to on the phone simultaneously with the pilot of the plane before the crash.

Soon after the pilot failed to contact Newark tower the plane collided with a New York helicopter with 6 people on board. The plane was traveling with 3 people; Rescue workers successfully retrieved the majority of the 9 bodies from the Hudson River. There were no survivors. The FAA continues to gather information about the tragic collision to figure out the cause for the crash.