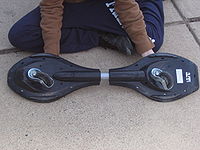 Jackson, NJ (NewYorkInjuryNews.com) –- A man from Brooklyn fell off his skating-board,  while holding onto the bumper of a car driven by his cousin, announced the Asbury Park Press. The man skating behind the vehicle was identified as 24-year-old John Giglio resident of Brooklyn, New York. His cousin driving the vehicle was identified as Tony Russo Jr, a local resident of Jackson, announced officials.

John Giglio was severely injured when he lost his footing on the casterboard and let go of his cousins 2009 Subaru. He was transported via ambulance to Jersey Shore University Medical Center located in Neptune, New Jersey. The scene of the accident was at Short Hills Boulevard in the town of Jackson.

Police officials, from the traffic safety unit, reported on the case stating that John Giglio had not been wearing a safety helmet, knee guards, braces, and pads, which is always highly recommended for use of casterboards.  When he fell off the board, he smashed his head against the ground, reported police.

Giglio was reported to be in the hospital as of Monday. The accident is under investigation to uncover the factors that played into this accident. The police will not further the case unless thorough evidence is acquired.