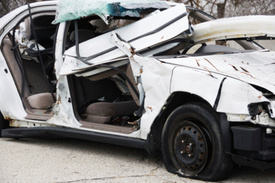 Lockport, NY (NewYorkInjuryNews.com) – New York police reported the scene of a fatal and tragic wreck with a tractor- trailer that claimed the life of one young woman, Tuesday, December, 22, 2009, according to WGRZ.

Emergency medical services (EMS) reported to the scene to assist and transport the injured. Police officials reported the crash to have taken place at 5643 Ridge Road between Purdy and Johnson Roads around 8 a.m. The fatal wreck caused police to close Ridge Road in both directions to the severity of the crash. A prior investigation by responding officials claimed that the person traveling eastbound had lost control of their vehicle, possibly due to wintry weather conditions, jumped into the westbound lanes and was struck by a tractor-trailer.

EMS loaded 29-year-old Cristina Portale, in the Mercy flight helicopter to take her to be treated by doctors and nurses at Erie County Medical Center. She died in the care of medical officials shortly after arrival. Police continue to investigate the crash to determine the factors involved. The name of the other woman is not being released due to pending notification of her family.