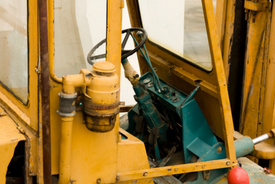 Hamden, CT (NewYorkInjuryNews.com) – The Occupational Safety and Health Administration (OSHA) www.osha.gov investigates a tragic accident which occurred on York Hill campus when a construction worker was killed by a forklift, Friday, January 15, 2010, according to The Quinnipiac Chronicle.

Hamden County police arrived at the scene soon after the incident to investigate. Police conducted a prior investigation and discovered that the O&G Industries employee was walking up a hill near the Crescent residence hall, when he was struck by a forklift. The forklift had been rolling down the hill backwards when it struck and critically injured the worker at 9:15 a.m.

Hamden Fire Rescue and emergency medical services (EMS) arrived at the scene soon after the serious accident. Police identified the worker as 58-year-old John Borovicka. It was not reported if there were other workers around at the time. EMS rushed Borovicka to Yale-New Haven Hospital to be cared for by doctors and nurses. His injuries proved fatal upon arrival while in the care of medical professionals. It was not reported if he had family members who were notified of the accident.

University officials were troubled to have heard of the workers fate. OSHA officials continue to probe the scene to determine the cause of the accident.